The Best Bi Antho got a great review from Heroes and Heartbreakers. 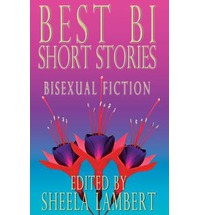 The reviewer, Victoria Janssen, did a nice run down of some of the stories, including what worked for her and what didn’t. She, ahem, only quoted one story:

The anthology starts off with a hilarious interlude by Storm Grant, “Dual Citizenship.”

“So.The Mountie. Something queer about him?” I say finally, careful of my wording. It’s hard to ask when the rule is “don’t.” As in “Don’t ask. Don’t tell.”

Grandy harrumphs. Won’t meet my eyes directly either. He’s probably wondering about the two holes in my left earlobe. “Well, I think I can say for pretty sure that he’s…” Grandy pauses, searches for the right word, then does meet my eyes, “…Canadian. You don’t have a problem with… Canadians, do you?”

“No sir. Got a cousin who’s… Canadian. Not a problem.” I fail to mention I’ve…been to Canada a few times myself since splitting with the ex-wife.

I’m honored to be part of this groundbreaking anthology. Thanks to Sheela Lambert, for her tireless efforts to get us published, to Cecilia Tan and Circlet Press for giving it a home, and to Victoria Janssen and Heroes and Heartbreaks for the terrific review.

Reaper News for You!

Simon & Schuster has arranged for THE RELUCTANT REAPER to be a KINDLE DAILY DEAL on March 4th! If you can hold off a few more days, you can have this fun-filled and pun-filled romp through Hell for only 99¢!!!

But then you’ve got to hurry. It’s only at that special price for one day!

BUT WAIT, THAT’S NOT ALL. I got my first video review! Mike from KillerBookMarketing says: “For a funny, entertaining read, I chose Scythe Does Matter by Gina X. Grant.  It’s the second book in the Reluctant Reaper Series:  http://amzn.to/1gRCGfY”

Thank you, Mike. I meet the nicest people on the Internet!

I started reading this book, curious what it might have in store for me. What happened to Kirsty d’Arc, the main character, is so unique, I couldn’t stop reading! Her journey through hell was written vividly, and I felt for the naïve young woman who was accidentally reaped and wants her life back. I liked Dante, her reaper, from the beginning, and loved them growing closer step by step. On her way through hell, Kirsty meets mythical characters, and I recognized some of them. I chuckled my way through this book, enjoyed the puns and wordgames. Now I’m looking forward to reading SCYTHE DOES MATTER, the next book in the series.
THE RELUCTANT REAPER has an unusual storyline and is worth reading!

This series sounded like a new interesting concept. It didn’t disappoint. I’ve always wondered what being a reaper was like. Dante is a hot guy! Kirsty has real spunk. As soon as I finished, I had to go get Scythe Does Matter!

Thank you so much, Hulk & Missilou!

I think the most thrilling part is the virtual “shelves” the reviewer “filed” my book under: fun-quirky-read, must-read-series, authors-to-follow, loved-the-cover

Kris from I Heart Books says:

I was looking for a quick and quirky read in the paranormal genre, but also wanted something different than anything I’d read before. Picky aren’t I? Well, The Reluctant Reaper… NAILED IT!

Read the rest of the review on Goodreads.

5 Stars for The Reluctant Reaper by Gina X.Grant

My Review:The book clocks in at about 227 pages, which would usually take me about a week to finish. I’m a slow reader, I’ve got toddlers in the house, and being mildly dyslexic makes casual reading something that requires a lot of attention.I finished this book in less than a day.

I was hooked from the first page.

Kirsty is a relatable, real character that I was rooting for all the way.

The story moves along at a nice clip with humor and puns peppered throughout. It does have puns but they aren’t over-done.

There are times when the main character drags a bit in pity, but then she did die, so that’s understandable.

There is a pleasant wit displayed among the wordplay and I look forward to the next in the series.

A fair and balanced review from All Things Urban Fantasy. She liked it.

REVIEW: The Reluctant Reaper is filled with 80s and 90s references that truly had me laughing out loud, and the wordplay is masterfully done. There is a lot of it, and I had trouble choosing what to quote in my review!

If you are looking for a quick, laugh-out-loud read, you should get The Reluctant Reaper when it is released [June 17], definitely worth it!

Some quotes that had me snorting:

When life had handed me lemons, I’d gone online and purchased grapefruits. Victoria’s Secret was safe with me.

In fact, the sex was so good that even the neighbors had a cigarette.

Thank you, Lexxie, for an encouraging and well-balanced review. Read the whole review, here.

And of course you can pre-order at all the usual locations, from Amazon to iTunes.

Will THE RELUCTANT REAPER become your guilty pleasure?

An encouraging and well-balanced review.

This novella is a campy romp through Hell.  It is not however the fire and brimstone realm of woe and torture bemoaned by clergy the world over. The Hell we have here is one made up of contracts, waiting lines, cross-dressing ferrymen, and reapers to-die-for.
The best things about this book are:
1.  Characters
2.  The Setting
3.  The Campiness

The worst things about this book are… (Read the rest here.)

THE RELUCTANT REAPER: A mini-review!

The Reluctant Reaper by Gina X. Grant was a really fun read! There are 80s and 90s references galore, and the wordplay made me snort so often I have too many highlights to share in my review that will be posted tomorrow.

If you want lots of good laughs and a sexy reaper, you should definitely pick this up as soon as it comes out!
~Found here: http://unconventionalbookviews.com/its-monday-what-are-you-reading-6

Made in Jersey was the first show to be cancelled this year, after only airing 2 episodes. Too bad. I liked what I’d seen. But I can understand why.

Here’s the problem. When I first saw Jersey listed in the fall TV guide, I recognized immediately that it was inspired by one of my fave book series, the Stephanie Plum books by Janet Evanovich. So I looked forward to it eagerly.

First off, Stephanie Plum is a bounty hunter, while Jersey’s main character is a lawyer. This was probably a “marketing” decision on the part of the suits (those people who decided airing Firefly’s third episode first was a good idea) to make the series “more accessible” or else they ran afoul of some copyright issues. But if that were the case. instead of giving her another unusual, exotic profession, they went with lawyer.

So now we have “just another legal drama.”

Sometimes you can take something old and make it new again by giving it a different spin. How different was House than every other medical drama before it? And they did give her a Jersey background complete with a Jersey family.

Here’s where they went wrong. The main character was perfect. She never set a foot wrong. Never said the wrong thing, never did the wrong thing. Even when it looked like she was going to, it all worked out without any fallout. Stephanie Plum? Not so much. Stephanie is constantly screwing up. She says herself that she’s a lousy bounty hunter and the only reason things work out for her is luck. At least once per book she is covered with guck, handcuffed to something and left there, almost blown up, or loses a car. Our Jersey gal? Never a hair out of place.

The Jersey heroine’s family was warm and supportive, if a little invasive. Stephanie Plum’s friends and family are over-the-top wacky, complete with strange habits, inappropriate behaviours, and everybody carries a gun. Her friends include an ex-“ho”, a straight transvestite, her crazy grandmother, and a boss who’s rumored to have had inappropriate relations with a chicken. On Jersey, the boss is strong, handsome and supportive. Agreeing with all her suggestions, although he does hesitate a beat or two over the wilder ones.

Stephanie has two love interests–a good cop and a good security guy who does bad things as well. On Jersey, I couldn’t tell who the love interests were, but all the characters were warm and supportive and never made a pass at her regardless of how beautiful she was.

In short, Hollywood took the wonderful Stephanie Plum books and sucked everything that made them work right outta there. It’s a lesson on how not to turn a great premise into a TV show.

In contrast, let’s look at True Blood. It may not be following the plotline of the books, but it continues to capture the dark-yet-fun feel of the books.

Still, despite it’s flaws, I liked Made in Jersey and I’m sorry it got cancelled.