Defying Genres and Genders . . . for the Win!

In an unprecedented bit of think-out-side-the-box marketing, Pocket Star (Simon & Schuster’s digital first imprint) is promoting my Bookie Award win even though it’s with a different publisher and written under my Storm Grant pen name. It’s still the same fun urban fantasy so it can only reflect well on my Reaper books. But how cool is that?

Defying Genres and Genders . . . for the Win!

FEW ARE CHOSEN is a humorous, young adult, multi-cultural, LGBT, paranormal, character study with a strong romantic subplot. All in less than 15,000 words!

Sound like an eclectic genre mash-up? It is! But it works. Works so well that it just won “Best YA Short Story of 2012” in the prestigious Bookie Awards. (The Bookies are “the first industry awards nominated and voted for by readers and bloggers alone!”) Each year they’re presented at the Authors After Dark convention attended by several hundred authors, readers, bloggers and industry professionals.

I’m honored and privileged that readers liked my book enough to nominate it. I’m blown away that it won! I love that a LGBT title took first place in a non-gender-specific category. Written under the pen name Storm Grant, FEW ARE CHOSEN is published by Riptide Publishing.

Intrigued? Wondering what I can do for my next act? You’ll want to check out THE RELUCTANT REAPER SERIES, now available from Simon & Schuster’s Pocket Star digital first imprint. It’s first and foremost humor, but it’s also an urban fantasy, a paranormal romance, and a character study starring a new adult heroine who will be 25 forever!

At some point in his many, many centuries of existence, someone had taught this boy a thing or two. I’d been afraid that he couldn’t possibly live up to my fantasies and expectations. But he did. And then some. The Earth moved. So did Hell. And possibly some of the furniture. In fact, the sex was so good that even the neighbors had a cigarette!

So, if you like that, check out the series rundown…. here:

Book 1. THE RELUCTANT REAPER, Death is what happens while you’re making other plans.
Book 2. SCYTHE DOES MATTER, Be careful what you wish for, it just might get you!
Book 3. ESPRIT DE CORPSE, Hell is where the heart is.

Both Storm Grant’s and Gina X. Grant’s books are available at all your fave etailers,

Remember that FEW ARE CHOSEN is currently on sale for $0.99 at Riptide, while THE RELUCTANT REAPER is freeee! 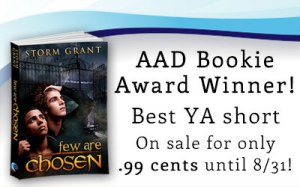