Re-Inventing Love is ON SALE!

It’s Boxing Day and All Romance Ebooks has certain titles on sale. Check out Re-Inventing Love. 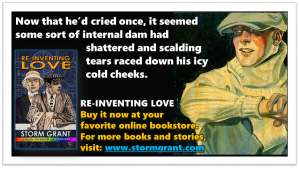 RE-INVENTING LOVE: The road to love is paved with good inventions.

Re-Inventing Love was judged a FINALIST* in the prestigious Rainbow Awards: (*Books receiving an average rate of 30 or more out of 40.) “Re-Inventing Love was an entertaining and engaging read. The characters were very endearing and I loved Max’s distinctive voice. Storm created a very credible world and I was transported there every time I picked the book up. I thoroughly enjoyed this book.” It also won an HONORABLE MENTION.

Engineer and assistant inventor Maximilian Grün is in love with his employer, but he daren’t reveal the truth. It’s 1910 and if Canadian authorities learned of his homosexuality, they’d deport him back to Germany where the country of his birth would become the country of his death.

When promising young inventor and mathematician Dr. Jasper Hamilton expresses his own feelings for Max, the young German regretfully declines. He cannot risk their partnership, their reputations—their very lives!

Then a rival inventor sabotages their inventions. Jasper is caught between the physical and the metaphysical, reduced to atoms, and transported to the spirit plane! Max is devastated, deeply regretting his lost chances.

But Jasper manages to communicate across the aether, telling Max he must reverse the machine’s polarity. But without Jasper’s talent for mathematics, the calculations defeat him.

Can the would-be lovers bridge the gap between life and death to finally be together?

FREE boys for you!

Sparks fly between virgin teenage demon hunters when the Chosen One turns out to be… the Chosen Two? 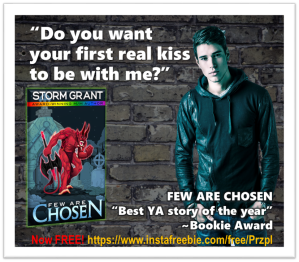 Blake St. Blake is the Chosen One, raised by an ancient order to defend the world against evil. Maybe not the whole world, but at least his neighborhood. When a dreaded reflux demon appears, Blake is sent to his very first battle, armed with sword, super-senses, a black leather duster, and a few well-rehearsed one-liners.

But another Chosen One gets in Blake’s way—an apprentice wizard named Shadow. While the boys argue about who’s more chosen, the demon escapes.

Blake wants to be angry, but Shadow’s pretty cute. Blake and Shadow are brave enough to challenge the reflux demon in a second battle, but will they have the courage to tell each other how they feel?

Click + Claim your FREE copy of the award-winning novella, Few Are Chosen.

My pal’s book cover is up for an award. Check ’em out here. You don’t have to vote for Joan’s, but you might want to check it out. Exceedingly user friendly voting system. Go here to vote: https://jabbic.hbarwa.com/readers/ViewCategory.php?cat=3

(From the hot off the presses Riptide newsletter:)
Few Are Chosen Wins Bookie Award – Special Savings

Congratulations to author Storm Grant, who took home a Bookie award this past weekend at Authors After Dark in Savannah! The sweet and funny new adult novellete Few Are Chosen won the category of year’s best YA short story. To celebrate, we’re making this title available for an award-winning price—just $0.99!

Click here to grab your copy of Few Are Chosen at this special discount price, but hurry—sale ends August 31.

I won! I won! But I almost got missed! #AADSAV

FEW ARE CHOSEN won Best YA Short Story of 2012 here at Authors After Dark’s Bookie Awards!  But I almost got skipped!

I had a blast at the Bookie Awards ceremony. I invited myself to sit at the Torquere table and the evening started out wit

h the two owners getting up to say a few words (they were the sponsors of the event) and getting engaged right there on the podium. The crowd went bonkers! We all cried for their joy!

Then MC Mary Janice Davidson–who is a huge influence on my writing–got up and was very funny. The next presenter got up and said, first they made you cry, then they made you laugh, what am I supposed to do now? Which made us all laugh.

Then they began to present in earnest category after category, Stella Price, organizer extraordinaire had arranged it so the first categories announced were the ones where the winners were present. So when they skipped over BEST YA SHORT STORY OF 2012, I assumed I hadn’t won. Oh, well. But I’m not bitter.

Then they went swiftly through the remaining categories and when my name was called everyone at my table yelled, but she’s here. She’s here! Apparently the registration was in my Gina X. Grant name and not Storm Grant, who’d actually won. But they let me make my wee acceptance speech (under 60 seconds was the mandate). They didn’t have a physical award for me but they’re going to mail one to me.

My acceptance speech was about how, when I’d first started writing slash fanfic and then m/m fiction, it had all been under the table and you didn’t tell anyone. Now, not too many years later, we were competing on an equal playing field with all genres and genders and it was all good.

So enjoy my wee story. It’s available here at the Riptide table or from all the regular eBook outlets. Here’s the Amazon link.