← The Return of the Footstool
The Secret of the Old Clock →

A place to rest my stuff…

I saw this little table at Salvation Army a couple of months ago. It was already black (my fave. Yay!), and had some cute styling to it. It weighed only a couple of pounds and fit in my shopping basket nicely. I think it was less than $10.00. It was, however, chipped and scratched, but I immediately thought about using it outdoors, so what did it matter? 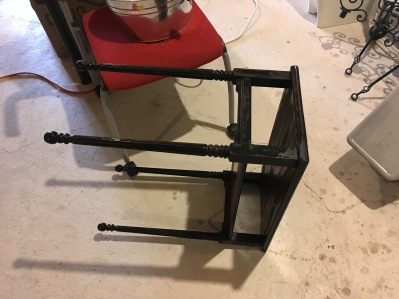 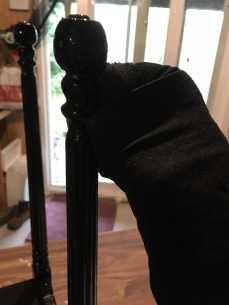 I finally got around to sanding it and repainting it. Since it was going outside, I used Rustoelum outdoor paint. Then I covered it in a couple of coats of Polyacrilic. Now the best way to apply Polyacrilic in order to not leave brush strokes or bubbles, is to put on a latex glove, hold onto a piece of sponge, and pull a cotton sock over it. It is way easier to paint detail and rounded things. I’ll definitely be doing this when it comes time to paint my staircase.

As it would be outside, I suspended the table and dipped each foot in Polyacrylic. 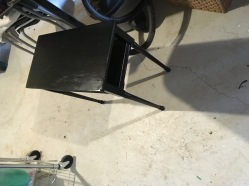 But I worried. It was going outside. So I grabbed some clear peel and stick protective plastic and applied that. Yikes! Well, I wasn’t careful and it ended up full of air bubbles. When I tried to smooth them out, the plastic scratched. It looked awful.

But I had some puffy plastic shelf liner I liked, so I glued that down. I don’t love it, but I’m afraid it I remove it, it’ll tear off the protective plastic, the paint and the veneer, and I’ll have to start again. Which I just might. 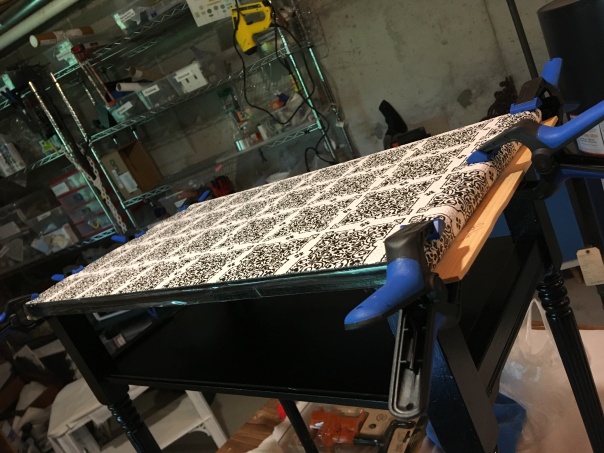 But in the meantime, here’s the little table by my front door. I can put my stuff down on it while I hunt for my keys. A future project is to paint the front door red and the side windows black. But for now, this is quite handy. 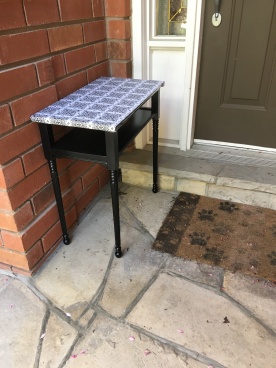 EDITED TO ADD: I wasn’t at all happy with the way it turned out. When a friend on Facebook mentioned it looked a little like tile, I got a brainstorm. What if I just glued some leftover tile to the top? 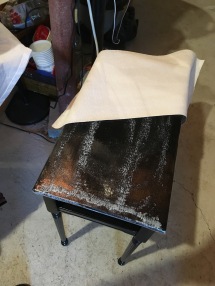 The glue under the black and white shelf liner was still wet, so I just washed it off both the shelf liner and the table top.

I had a few tiles left over from doing the mudroom in my previous home. They were one of the last things I decided to haul from Toronto, but now I’m glad I did. 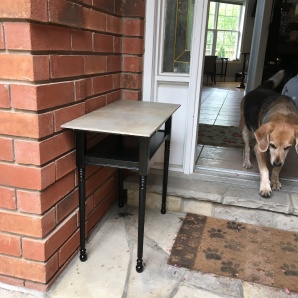 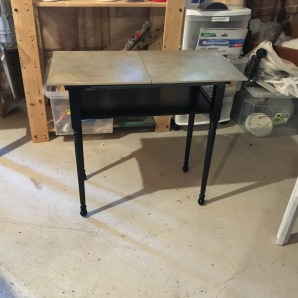 I'm a writer and now, a newbie upcycler. I have 12 books published under 2 pen names. I've taken a 2-year hiatus from writing while I re-purposed my life, but the more I rescue furniture destined to become landfill, the more I feel inspired to write a new book. After all, I gotta do something while waiting for the next coat of paint to dry. Stick with me while I figure out the differences between chalk, milk and mineral paints, which stripper removes shellac and sticky stuff, and whether I want to do stencils, tansfers or decoupage. Oh, and which one is the drill and which the power screwdriver.
View all posts by Gina Storm Grant »

Posted on June 3, 2019, in #Upcycling #NewLife #Feminista. Bookmark the permalink. Leave a comment.

← The Return of the Footstool
The Secret of the Old Clock →