Patrick at QueryTracker graciously included me in his “Success Story” series. Thank you, Patrick.

At the end of the fun interview, I included both my original query letter, and also, with her permission, the proposal my agent wrote that sold the 3-book series to Simon & Schuster.

(Warning: Contains spoilers for the first two books. And also, bear in mind the book was substantially rewritten between the query and the proposal.)

I think you’ll find this of interest. I know I’d never seen a proposal before. 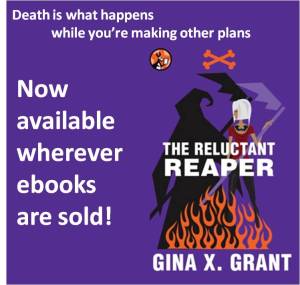 I'm a writer and upcycler. I have 14 books published under 3 pen names: Storm Grant, Gina X. Grant, and Gina Storm Grant. I rescue found furniture from the curb, as well as one oversized Mexican Street Dog named Canoli.
View all posts by Gina Storm Grant »