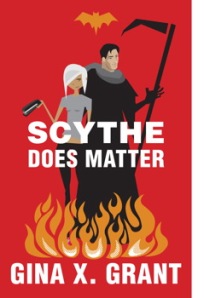 BLURB: Kirsty’s afterlife gets even more Hellish in this second installment of The Reluctant Reaper series when her soul-stealing ex-boss targets her beloved aunt. Her only chance to stop him? Becoming a Reaper herself. Fortunately, her hunky new boyfriend, Italian-poet-turned-Reaper Dante Alighieri, is there to help.Still trapped in the bureaucratic inferno known as Hell, Kirsty d’Arc redoubles her efforts to escape back to the Mortal Coil when she learns Conrad is after the soul of her beloved aunt. To save Aunt Carey, Kirsty must enroll at the Reaper Academy and earn a scythe of her own. Studying topics like Exor-scything 101, Riding the Death Cycle, and Reincarnation for Dummies is strange. But then, so are her classmates: a fallen angel, the Death Valley girls, and Kali—the ancient god of death, destruction, and those little earring backs that always go missing.

Now time is running out thanks to a temporal crisis she may have accidentally created. Can she graduate, rescue her aunt, take down Conrad, and save Hell and every other dimension—before the clock stops ticking?

As the saying goes in Hell, “Be careful what you wish for; it just might get you!”

I'm a writer and now, a newbie upcycler. I have 12 books published under 2 pen names. I've taken a 2-year hiatus from writing while I re-purposed my life, but the more I rescue furniture destined to become landfill, the more I feel inspired to write a new book. After all, I gotta do something while waiting for the next coat of paint to dry. Stick with me while I figure out the differences between chalk, milk and mineral paints, which stripper removes shellac and sticky stuff, and whether I want to do stencils, tansfers or decoupage. Oh, and which one is the drill and which the power screwdriver.
View all posts by Gina Storm Grant »